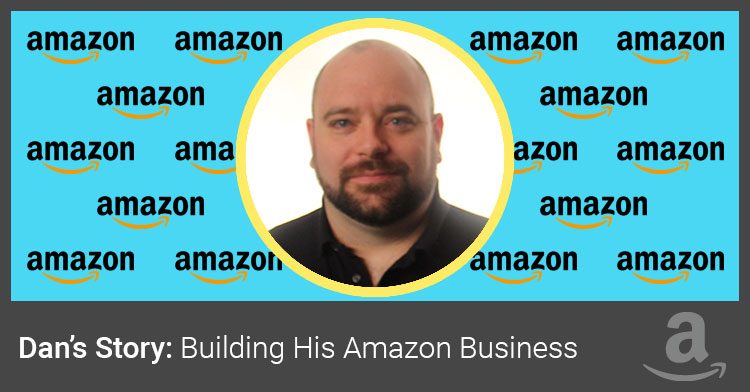 I hadn’t spoken to Dan in a couple of years since I introduced him to Amazing Selling Machine back in 2014 and he was part of our mastermind group.

As he told me more I had to ask if he would do an interview to share his story with all of you, how he got started and what he’s done to achieve eye watering figures on Amazon.

This short video is well worth watching… Dan takes a completely different approach to Amazon, one that was brand new to me as well.

I’m so excited about this year, I’ve set some ambitious goals for our businesses and “Dan’s Story” has only pumped up that excitement and motivation to go and get it done.

We started selling in August 2011. It was me and my partner Eric.

One of our buddies had told us about Amazon and honestly I didn’t believe it was a real thing. So, we were like “yeah we’ll try it, who cares”.

So we got a $600 credit card and went out and bought some product.

We sent it in to Amazon and it sold so fast we were like “holy moly - what is going on here”!

We’re some of the fortunate folks that have the nifty cash out button and we could just push it and cash out of Amazon and pay off the credit card we had. So we were able to replicate that process a bunch of times in 2011 even though we had full time jobs.

In fact, we were so confident in the model that we just jumped over and left our full time jobs and started selling full time on Amazon in January 2012.

We were entirely Retail Arbitrage at that time and we did about $1million in sales that year (Retail Arbitrage is where you buy products from retails stores at a discount / promotion and then resell on Amazon at a profit).

Same thing in 2013 we did about $940,000. But one of the thing we were noticing was, we were really killing ourselves putting in hours trying to drive around Kentucky.

There’s not a lot of stores around here, we have one Walmart, one Walgreens and one Kmart. The closest Target to me is an hour and a half. We were constantly having to drive around to find product, it wasn’t exactly a sourcing metropolis.

Honestly it was a bit disheartening. We were basically spent. We just couldn’t pour more hours into it.

So we were looking to change our model in 2014 and looked at all the different kinds of models for selling on Amazon.

We thought about Private Label, but honestly didn’t feel like we were smart enough to do private label, there’s a lot more to it. So we started with Wholesale.

So we started from scratch and in 2014, just me and Eric, we did about $400,000 sales in just wholesale products and ended up at about $1.28million for the year (including earlier retail arbitrage sales).

Honestly we were so sold into the Wholesale model, we loved it. It was refreshing and we realised it was something we could truly scale.

So, 2015 we hired a couple of employees, we moved into a slightly bigger space and we decided we are only going to sell Wholesale product this year. We were really going to try and concentrate and become experts in it.

It was awesome, because with Wholesale we focus on replenishable product. We're not buying closeouts or anything like that. So all the products we buy, once we setup those accounts we can restock them over and over again.

So it’s really effective at helping us scale because we can keep accounts and products for a long period of time.

One of the next things that we decided was that we were going to become even more aggressive, brought on more employees and it was really funny because we had spent all those years working 70-80 hours a week and now me and Eric really just removed ourselves from the process by working with great Virtual Assistants and things like that to further reduce our time and honestly at this time I’m pretty sure we work about 10 hours a week on the Amazon business. Everything is just handled by our team.

This year, we already at $5million and should hit around $8million as we’re expecting a really good final Quarter 4.*

That gives you an idea about our growth from just embracing the wholesale model.

I would like to extend a big thanks to Dan for sharing his story with us and hopefully giving us all some inspiration and motivation to start the year off with.

This year, Dan & Eric will top 8-figures on Amazon*. Your Big Break is out there, you just have to be willing to work for it.*